This is written for the Tuesday dVerse prompt “women are people: invoking Amrita Pritam“. Thanks for a great prompt Punam, and especially for introducing me to Amrita Pritam’s work.

I chose as my jumping off point her line from empty space: “Look further on ahead, there between truth and falsehood, a little empty space.”

What if I wrapped up my truth
in academic verbosity,
called it auto-ethnography,
and submitted it for your review?
Would it still get a rejection
on the grounds of misperceptions?
What if I edited it carefully,
removed the tell-tale markers
like all those excess hedges
and threw in more self-mentions?
Would it still require your corrections?

I never knew there was a line,
between your truth and mine,
until you showed it to me.
But I still don’t see why one side has to be
true and the other false.
Can’t we just blur out the line,
and allow a space between to meet
where no one has to be at fault?

I’ve had rants before about being a woman in physics/engineering, and how patronising colleagues can be – how they are (at best) oblivious to, or (worse) blatantly denying of the lived experiences of those who are not (middle-aged+ white) males.  So I won’t start another one of those.
But here is an interesting bit of research from one of my PhD students: there are quantifiable differences in the way (senior) men and women write in science, despite the very strong genre conventions.  For example, women use more hedges (an explicitly taught genre norm) and more engagement markers, men use more boosters and self-mentions (despite these being officially frowned on in science). The differences are largest in physics… surprise, surprise.

a stutter in the seasons

Summer refuses to depart,
though the sun’s daily arc
now starts well north of east
and ends far short west.
Reluctant to leave,
though the lights are dimmed
she drags out another encore.

And this hesitation confuses:
only half-way to winter
but beneath the soil
barely-rested bulbs
raise their new green spires
like a scattering of uncertain applause
through last season’s still green foliage.

This succession of Indian summers, in which
any colder day seems a transient glitch, is
a stutter in the seasons –
so summer plays again and again.

But the sun cannot be fooled –
he rises and inscribes
an autumnal arc across the sky.

Some years ago a friend visiting from Sydney asked “do you get many sunsets here?”, to which I gave the obvious answer “yes, every day”. But I guess they’re more noticeable here – the kitchen window faces west, towards a long ridge, and he was looking out that window at the sunset when he asked. The point along the ridge where the sun sinks changes with the seasons, like a sundial calendar.  So even though it feels like summer at the moment, the point where the sun is going down is well to the north now of where the summer sun sinks. In the southern hemisphere the sun heads north for the winter, not south.  🙂

A mother, a father,
two brothers and a sister –
a game of five –
how to arrange them
to minimise frustration
in this spin glass disarray,
where every second interaction
is a source of dissatisfaction.

There is no good,
but is there good enough,
when metastable
is the best solution on the table?

If I step away,
will I see a solution
to the riddles of these four?
Or have I solved them already
by walking out the door?

For the dVerse “Carroll crush saga” prompt – choose three of the Lewis Carroll titles from the list provided, and crush them up into a poem. I chose: “Brother and Sister”, “A Game of Fives” and “Four Riddles”, and threw in some physics. A spin glass is a metastable system because it is impossible to satisfy all interactions between particles simultaneously – there is always frustration in the system as long as it is bound together.

For the dVerse prompt “This one’s for you Bjorn“, set by Lilian in honour of Bjorn who is a (fellow) physicist, and requiring the use of a line from ABBA’s “dancing queen”.

So, here is a little nerdity for Bjorn:

Each double slit’s a sliding door,
to a strand within the multiverse, or…
Can’t decide, and no one’s looking?
Go through both, you’ll have them cooking,
up a theory on how you danced
through those doors – by choice or chance?
Do you expose a God’s immorality
with your fluttering waves of probability?
We’ve counters, film and CCD,
you think we’re blind, but you’ve been seen –
though you’re a teaser, you turn em on,
you sneaky little el-ec-tron.

for L_, who I trust and respect

I didn’t go to his funeral. Even if I could have, I would not have gone. Funerals are for the living, END_OF_DOCUMENT_TOKEN_TO_BE_REPLACED

some notes for Selma

Some notes for Selma on orbits, because I couldn’t put all this in a comment.

I can’t add a file other than an image, so here are my notes on orbits for Selma as a bunch of images. If they look fuzzy, just click on the image and it will display as a nice clear version. END_OF_DOCUMENT_TOKEN_TO_BE_REPLACED

confession of a physicist

So, I wrote my last post in response to the dVerse prosery prompt, which was to write up to 144 words of prose including  the line “I am bombarded yet I stand”. Then I thought I’d better actually read the poem by Adrienne Rich, “Planetarium”, that the line comes from.  And I wrote this as my proseyness instead:

I don’t like astronomy. I find it really boring.

Go on, gasp in horror. Judge me soulless. END_OF_DOCUMENT_TOKEN_TO_BE_REPLACED

friction does not oppose motion – seriously, it doesn’t.

with apologies to Gordon Sumner….:

Every move you make,
Every step you take,
Every game you play,
Unless still you stay,
Friction’s moving you.

FBD, chant with me!

I use the odd rhyme and other mnemonics in my teaching, including online last year asking my class to turn on their microphones and all repeat after me:

“I solemnly swear, to draw the forces, all the forces, and nothing but the forces, on my free  body diagrams. So help me John”. (John is my co-lecturer – and it sounded better than “so help me Kate”).

But after pondering the dVerse prompt to meet the bar with  a chant, I now have something bigger and… maybe…better… for this year’s cohort:

Now I know ’cause Kate told me

Now I know ‘cause Kate told me

I must master free body

I must master free body

Diagrams that show each force

Diagrams that show each force

If I want to pass this course

If I want to pass this course END_OF_DOCUMENT_TOKEN_TO_BE_REPLACED

A while I ago I posted a rant about rainbows. It was triggered by a comment that science ruins rainbows by taking away the magic. My argument in that post was that science adds to their beauty and magic because it allows you to “see” so much more in them.
A couple of days ago I was walking across a carpark and it had just started raining. And there was a stunning rainbow on the ground: 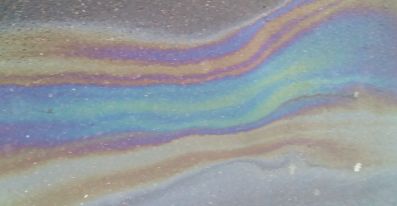