Friction does not oppose motion!

You can’t, of course
walk or drive, with
no friction force.
Please tell your kith
and tell your kin:
You can’t begin
without friction.

So give up this
misconception
and you wont miss
its deception.
Your FBDs
you’ll find will please
your physics prof.

This was triggered by the Twisted Mouse’s post The Frictional Force of Stupidity (If you’ve never looked at his stuff – why the hell not?? It’s brilliant.).

But it’s mainly a response to years and years of trying to get students to give up the idea that “friction opposes motion”. It doesn’t!!! It opposes the sliding of one surface against another. Friction is the force that makes your car go forwards when you accelerate, so you don’t look like an idiot sitting at the lights spinning your wheels. It’s the force that allows you to walk. Ever tried walking on a really, really slippery surface? Your feet just go out from under you. Unless you’re jet-propelling yourself along (and I probably don’t want to know how you’re doing that), you need friction to move!

The internet is full of incorrect force diagrams (aka Free Body Diagrams or FBDs) showing the forces acting on a car, with friction the wrong way and a magical force due to the engine providing the force in the direction of acceleration. An engine does not exert a force on a car. Seriously, it doesn’t. It’s part of the car, so it can’t. (Ever tried pulling yourself up by your bootstraps? It only works metaphorically, not literally.)

Here is a correct Free Body Diagram (FBD) for a car accelerating forwards. Note that I’ve left off drag due to air, because at low speeds that force is (to use the technical term) buggerall. (Really, really small forces are termed buggerallsquared). This is for an all-wheel drive. Any wheels not providing a driving force have a small (buggerall) rolling friction acting on them, which would be better left off the diagram to avoid confusion. 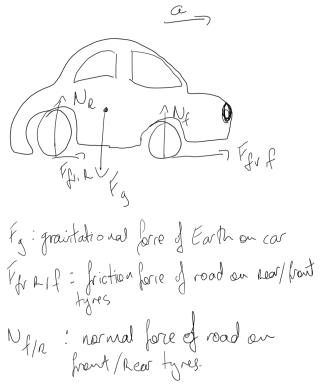 Here endeth the lesson.  Any questions??? (Seriously, happy to take questions on this.)

23 responses to “Friction does not oppose motion!”